In its fourth red carpet appearance in Europe over the last few years, Richter Studios recently won the coveted gold trophy at the 2019 Deauville Green Awards in Normandy, France. Out of 420 films that were submitted, the Chicago video production company was among a small group of production companies worldwide that were voted for the festival’s top honor.

“What a remarkable creative journey,” said Jeremy Richter, CEO of Richter Studios. “I am so proud to see my team at Richter Studios be honored in such a spectacular way. Our collaboration on this film with the British International School of Chicago, Lincoln Park and Urban Rivers was a truly special one. To see us honored in Deauville –  a beautiful city that has celebrated the art of cinema for many decades – and to receive the gold trophy for such an outstanding body of work is something I will cherish forever.” CEO Jeremy Richter celebrating with the gold trophy award along with jury member Lee Gluckman. Mr. Gluckman is also the Chairman of the Mobius Awards and US International Film & Video Festival.

The winning film for Richter Studios was called “Floating Gardens” and it was created for the British International School of Chicago (BISC), Lincoln Park. Richter Studios won the award in the “Preservation of Biodiversity” category. The short film tells the story of how the school’s students are utilizing their STEAM-based skills to bring the biodiversity back to the “Wild Mile” portion of the Chicago River. Appearing in the film with BISC Lincoln Park was Urban Rivers, whose mile long project has been officially endorsed by the city of Chicago. 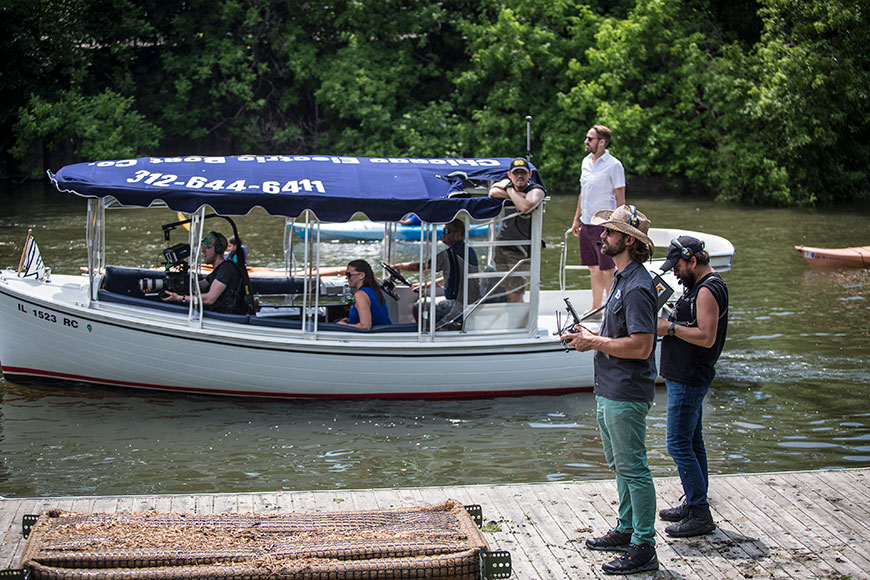 The Deauville Green Awards took place on June 12th and 13th, 2019 in Deauville, France. The famous resort town is also the site of the annual Deauville American Film festival, which began in 1975 and recently celebrated its 45th edition. Many American movie stars are celebrated by the city and are even provided a permanent beach cabin that bears their name. In 2018, Oscar-wining actor Morgan Freeman was inducted to much fanfare. The iconic Richter Studios action slate enjoying a spectacular view on the beaches of Deauville, France.

The festival took place over the course of two days in early June (2019). The festivities kicked off with screenings of the winning films at the Villa Le Cercle. CEO Jeremy Richter was in attendance to present the “Floating Gardens” film and answered questions from the audience and jury members. Jeremy Richter at the Villa Le Cercle for the opening celebration.

During the second day of the festival, participants were treated to a special luncheon gathering at the famous Villa Strassburger. Built in 1907 by Baron Henri de Rothschild, it was later purchased by the American business tycoon Ralph Strassburger, who was a well-known racehorse owner. The estate was donated the town of Deauville in 1980 and is the most famous villa in the region. Entrance to the Villa Strassburger, an architectural wonder in Deauville, France. Jeremy Richter with his son Ethan during the luncheon celebration at the Villa Strassburger.

The highlight of the of the two-day festival was the award ceremony at the Casino Barrière de Deauville. Amazingly, this is the same venue that James Bond creator and author, Ian Fleming, based the famous film “Casino Royale” on. Although it was Fleming’s first-ever Bond novel (1953), the film was adapted for the screen three separate times. The most recent adaption featured megastar Daniel Craig. Crowds form outside the Casino Barrière de Deauville for the Awards Gala Event. The party at Casino Barrière de Deauville carried late into the evening.