The Emergence of Multi-Camera Shoots

It was only a matter of time. What was once a unique advantage for those who understood its potential, has now transformed into a very competitive playing field.

With video ads making up 35% of online advertising budgets (source), marketers have duly noted the memo about the power of video to get results. However, with this level of saturation, new strategies must be pursued in order for your next product or service to stand out in this medium. One area of video production that the team at Richter Studios has had great success with recently is multi-camera shoots.

Visually speaking, many videos that are presently filtering through the web suffer from what we affectionately call the “Handyman Larry Trap”. Put simply, this is when a video production is typically handled by just one person. Not a terrible solution for the budget conscious but if you’re truly trying to make your video standout, the new name of the game is multi-camera shoots.

As the name implies, multi-camera shoots require more than one camera to capture interviews and B-Roll. There are many benefits to this approach, including better editing latitude, efficiency gains and overall production aesthetic. I’ll go over each one of these in detail but first let’s set the stage appropriately and review a few recent videos that involved multi-camera shoots. The first one is for ShopperTrak.

ShopperTrak – The Shoppes At Mandalay Place

The ShopperTrak video was filmed on location at Mandalay Bay in Las Vegas and we employed four separate cameras to capture the footage featured in the finished video. Three cameras were set up not only to capture the interview but, as can be seen, to serve as props in the video itself. Notice how one of the cameras is moving during the interview? This was intended and it really adds a layer of visual depth to the experience. All in all, it translates into a rich cinematic look that highlights the powerful performance by the gentleman featured on-camera. As for the B-Roll, we used these same cameras (plus a Go Pro for the Vegas strip shot) to capture the various cuts that were incorporated of the shopping experience.

Let’s take a look at a second example that had a different set of production requirements due to the live nature of the event. This one was for The Principal and we had six cameras recording simultaneously to capture the magic. Four were roaming the audience during the presentation and another two were set-up for the attendee interviews immediately following the event.

Embracing a multi-camera approach opens many doors, both creatively and operationally. The end goal, of course, is to tell great stories and effectively communicate your brand messaging. The key, in my opinion, to this new era of “video everywhere” is to avoid the mistake of underestimating the sophisticated expectations of your audience.

Fore example, how many times have you found yourself refining your search on Google or Amazon? You’re diligent in finding the perfect search terms because you know if you get it just right, there’s a good chance you’ll find exactly what you’re looking for – or perhaps something even better. Hence, if your video doesn’t hit the intended mark because of its traditional look/feel (ie. one camera, shot on a tripod), your audience is likely going to dig deeper because they too know that hidden gems are just around the corner if they search a slightly different way for the product or service they are seeking. And since 90% of viewers say that seeing a video about a product is helpful in the decision process (source), it’s probably also safe to say that the video which is the most engaging has a good chance of winning lots of hearts and minds.

Here’s a summary of the benefits of multi-camera shoots that I mentioned above:

Better Editing Latitude – One of the quickest, surest ways to discover the benefits of multi-camera shoots is by having to go through a difficult on-camera interview. We’ve all been there, where the seemingly ideal candidate suddenly goes 100% cold fusion on you (aka “deer in headlights”….) and can’t seem to form a single logical sentence. If I were to count the amount of times that Camera B saved the day in these types of instances, the sheer number would astound you. Having a second camera – and sometimes even a third – can help you piece together an award-winning sound bite(s) more times than seems possible. If you’re caught in the middle of an interview going south, the trick is to ask the same question several times with slight variations. In listening to their responses, you’ll be able to gauge when you have enough of what you need to piece it together coherently. However, if you have just one camera, you may end up having to shelf the interview because of all the glaring face palms. Why take that kind of risk? 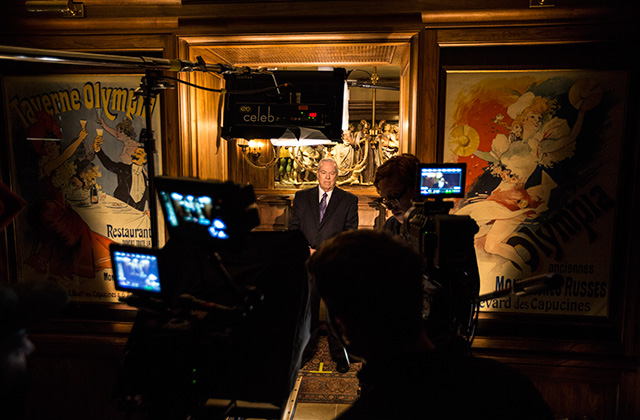 Efficiency Gains – Another area that feels the dramatic impact of multi-camera shoots would clearly be efficiency. Specifically, when capturing cut-away or “B-Roll” footage. Instead of having “Handyman Larry” running around all by himself, now you have two or three cinematographers covering the scene. This opens up possibilities of capturing more of a given environment in a shorter period of time. As with interviews, you can also capture the same subject matter simultaneously, providing more creative latitude during post-production. You need to think of it like you’re capturing a live marathon. Whereas once you could only film the runners at the finish line, now you have the ability to capture the action from multiple perspectives, be that from helicopters, cars that mirror the action or even from a GoPro camera attached to their chest. Truly a brave new world to explore and then some but the creative payoff can be very gratifying.

Overall Production Aesthetic – As we all know, first impressions are everything. The number of cameras capturing and ultimately conveying your brand to customers is a critical decision. Done correctly, they can establish a visual tone and aesthetic that lands deep into the viewer’s subconscious. I’ve done this enough times where I can say with a great deal of confidence that a vast majority of video magic for our clients happens in less than thirty seconds. The more creative options you have at your disposal during this brief timeframe, the better the finished video will likely look and, ultimately, feel for the viewer. For fun, try and think of it in terms of enjoying a fine dining experience. You wouldn’t just order the main course and be done with it. There are drinks, appetizers, soups, salads, sorbets to cleanse the palate, etc.

Cameras have the unique ability to capture as many magical moments as you are willing to chase. More cameras….More amazing moments. As an important side note, some of our greatest camera magic has happened serendipitously. Many times, the last two seconds of a seemingly average clip would suddenly go Emmy Award-Winning on us. Thank goodness we were continuously experimenting and just happened to leave the camera recording for a few more seconds.

In order to position your brand favorably in a quickly growing jungle, it’s often best to consider what you might miss by not bringing a second or third camera than focusing on what you hope to gain by putting your hopes and aspirations through a single lense. As the founder of Kodak, George Eastman, famously once said, “The world is moving, and a company that contents itself with the present soon falls behind.”